When you have this many headliners in one weekend, what are you supposed to do? First weekend in September unleashes fresh sounds from the best and brightest in our chosen genres, and we’re here for it. The new LP from Animal Ghosts has to be the first among equals in this case, because it’s a full album of epic hazy shoegaze. But that’s just the tip of the awesome iceberg: new music today from Airiel, Star Tropics‘ sparkly DKFM Dreamgaze Worldwide session, and the impressive new EP from 93millionmilesfromthesun. We celebrate the return of the mighty Black Nite Crash, as we see them adding fresh psych flourishes to their already heavy, propulsive gaze. The surprise limited single/cover from The Stargazer Lilies, who will charm your socks off with their take on a Radiohead classic. The new single from NewDad is the feel bad song of the summer, and it’s sure to hit heavy rotation immediately. The new single from Uniforms (which we celebrated here) is another harbinger of a full LP that’s certain to win fans and converts around the globe. We’re long on WHYYES, The Infinite Daisy Chains, Ten Million Lights, Phasing, Rapt, ETHICA, Small Planets, House of Harm, gloomchurch, Draag, Citrus Clouds, Balms, Babel Map, Agent blå, and the surprise return of YAST under a new configuration and imprint: Toi Let: their rollicking cover of the B52’s “Give Me Back My Man” is a thing to behold.

New Tracks Weekend is launched at 8 pm Eastern, 5 pm Pacific, and continues through Sunday at midnight Eastern, 9 Pacific. It’s the first weekend we’ll spin some of these tracks, and may be the last weekend for some others. Remember, you can listen listen via the station playlist page at DKFM, on Shoutcast, and on TuneIn Radio for iPhone/Android/Windows. Plus we have our branded apps for Apple’s iOS and Android: listeners can vote on all the new tracks, helping us determine what graduates to permanent rotation. Your voice counts! We’re live-scrobbling once again via last.fm. Now you’ll know what you heard, or catch up on what you missed. Keep up with our new Facebook group for some real-time discussions of what you’ve heard, and sound off!

And, as always, thanks for listening, and thank you for your support! 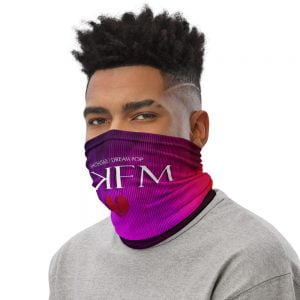 Gazey gear for shut ins: get your mugs, shirts, hats and more here!

First crossing our radar with their "EQUALS" EP at the dawn of 2018, dreamy Spanish noisegazers Uniforms have presented an unique and engaging sound: part bubblegum, part sludge, all charm. Sonically diverse, always finding the best arrangement and instrumentation to serve the song, Uniforms has never been afraid to go their own way. From spacey keyboard glitches to jangle riffs to fuzzy chords, it's their sound. You can count on […]